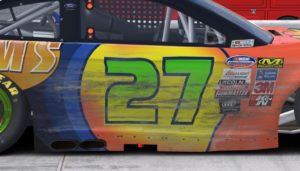 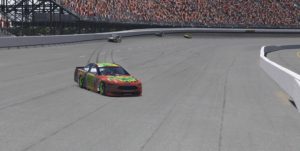 Last week it was THAT week. Trellet.net iRacing oval series had a race on a superspeedway, at Talladega. Driving those totally silly NASCAR Gen 6 powerhouses. And as always, it was thrilling, exciting, sometimes it was almost like panic, even though on overall the race was quite boring. Driving about 50 second laps 80 times in a row, maybe one pit stop, on a track with only left turns and ridiculous banking which means that you never have to lift off the gas pedal (except for the pit stop…) How boring can it be?

Sounds boring, but especially on superspeedways the whole bunch of cars may stay together in a very tight pack all the way to the chequered flag. There is car right in front of you, another one right behind you. If the situation is really hairy, there is also car to your left and to your right. One wrong move and you are toast, and probably guilty of a big pile-up, chaos and mayhem. There is just no rest, you have to be careful all the time. And did you remember to check the engine temperatures…

There are basically three things you need to do:

Talladega is so intense that it is easy to make some silly thing wrong that ruins your race. And ruins your whole week.

So yeah. The race was last week and I didn’t do my job properly. I failed at one of those three things. Guess which one?

I failed at the fuel-issue. Half way through the race I made my scheduled pit stop. Some other cars entered the pit lane at the same time. I broke hard, got a bit sideways, but managed to control the car. Stopped at my pit stall, got my pit service. Exited out of the pits, everything seemed to go smoothly, I think I even overtook some cars on the pit stop. Hit the gas, move from apron to the track after turn 2. Approaching turn 3 the spotter wants to say something.

What did he say?

Did he say I have fuel for one lap?

Re-enter the pits. Lose one lap to the leaders. My race destroyed.

This was my third race on the trellet.net season and twice I have failed to refuel at the pit stop. Why? Why me? Well, maybe the next time.

Fortunately this is ONLY sim racing!